Thank you for your patience while we retrieve your images.

The highway communicator (AKA Flashback or Programmable Bumper Sticker) was the realization of a childhood dream to be able to communicate with people in other cars while driving. I was the only distracted driver on the road texting in 1980! It includes a keyboard, miniature display, and large rear-facing display. The texting system was created and refined from 1980 to 1982. This was actually an automotive computer created the same year that representatives from IBM first met Bill Gates. In the days of "pac-man", this got a lot of attention on the highway. Sometimes two or three lanes would be completely blocked by a convoy of drivers all trying to read my panel. Typing with the keyboard on the steering wheel helped me stay awake on long boring drives, so I figure it actually made me safer. It was especially useful when driving somewhere with two cars. "Are you hungry? (flash once for yes)." Back in the days of cheap gas, my roommate and I would go out on texting joy rides. One time we were aggressively followed and had to take evasive action.

I created the project on my own in my spare time. I was thinking of making it a commercial product, but changed my mind due to liability worries (who knew, right?) and run-ins with the law. The effort included product design, digital electronics, circuit board layout, software design, and mechanical engineering. The initial version used strobed LEDs and was thus not bright enough for daytime use. This was disappointing, because it was impossible to see reactions at night. The second version used direct-drive incandescent bulbs and was thus much more fun. After being pulled over by the police in Concord, MA, and being told that the display illegally blocked my rear view, I motorized the second version. It flipped up when in use and automatically closed afterwards (mechanical linkage was dental floss). The device was used in various vehicles over a period of 18 years and it survived a collision where my car was totaled (hit from the side, display was off!).

I presented this project at Computervision, where I was employed at the time, during an engineering professional development session. My tongue-in-cheek title was "Microprocessors in High Speed Communication" where "High Speed" meant 55 MPH!
© Solomon Images 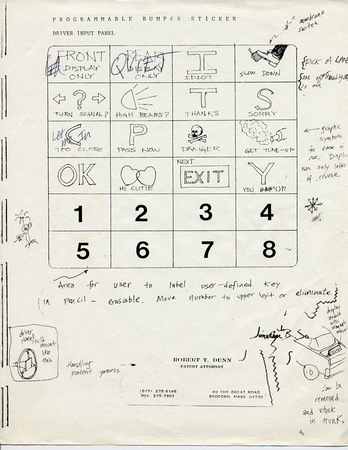